The top 4, #1 LSU, #2 Ohio State, #3 Clemson and #4 Oklahoma preparing for opportunity to win it all. This is a little different playoff environment compared to recent history. The path to the National Championship game has been going through Alabama for quite sometime.

Clemson Tigers and Bama have been facing each other like a stare down before a boxing fight. Clemson has been the top dog the past few seasons and the defending national champs. But and once again they will battle in this year's College Football Playoffs but this time it's against different opponent, the Ohio State Buckeyes.

The Tigers defeated Ohio State in the 2014 Orange Bowl after OSU lost in the Big Ten title game to Michigan State, which cost the Buckeyes a trip to the national championship game.

Overall both teams are on a winning streak. Clemson has won 28 consecutive games and Ohio State has won 21 in a row. The Buckeyes will be wearing the  home version of its 1968 Diamond Quest Nike Swoosh uniform for the Fiesta Bowl. They wore the away version of this jersey the last time they played the Tigers in the playoff in 2016. Ohio State also wore the home retro jerseys when it knocked off Oregon in the National Championship game in 2015.

In 2015, NOVA® Home Loans Arizona Bowl was the first digitally focused bowl game in history. It continues to make history.

Last year, the game was streamed live on Campus Insiders and available worldwide.

ASN provided a linear broadcast and televised the game throughout the country reaching over an incredible 88 million households.

The NOVA® Home Loans Arizona Bowl will be broadcast over the great digital platforms of Campus Insiders and will also broadcast live around the country on American Sports Network. Click here to stream and find your local listing.  Find broadcast listings here >

Article
Arizona State's AD, Ray Anderson see promise and has faith in his coach Herm Edwards. He made it clear that stronger efforts will be made in the off-season to improve the program. Anderson said he will meet with Edwards to discuss the season and to identify areas of improvement after previous seasons. "There's no question that at this point we have not reached our expectations," Anderson said.

The significance to appear in a bowl game has a positive affect on team confidence, recruits, history and achieving success. Of course it brings in money for the University.
"At the end of the day, you haven't been successful if you haven't gone to a bowl,'' he said.

An overall indication of program health is recruiting, Anderson said. 247 Sports ranked ASU's 2019 recruiting class one of the best in the nation. Rivals had the Sun Devils lower rated, while Scout.com had them with a highly rated class of recruits.

NCAA rules prevents him from discussing specific recruits, but it's clear ASU has secured local 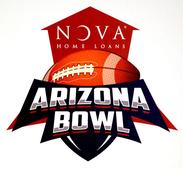