Are Jets Looking For That Pilot?
Joe Namath is forever the legend of Super Bowl memories. His Super Bowl III guarantee victory for the N.Y. Jets reminds us that anything is possible. Unfortunately for the Jets and their fans, finding a quarterback to match Namath's accomplishment has not happened. Past years did not look promising with Ryan Fitzpatrick and oft injured Geno Smith. But Fitzpatrick performed well.

Let's take a look back at the near misses and yet successful post-season Jets quarterbacks.  Richard Todd came close. They use to say in the old days at Shea Stadium, "Todd is God". He nearly brought them to a Super Bowl but a rain soaked Orange Bowl in Miami washed away those dreams.

Then it was "Yo" Vinny Testaverde who had the Jets in another AFC Championship where they lost to the Broncos.

Oh! There's Mark Sanchez, who is the only Jets QB to lead his team to 2 Conference Championship games. But like the previous signal-callers, lost again. This time to the Colts and Steelers.

Finally, you have to credit Ken O'Brien in the late 1980's for getting the Jets into the playoffs and Chad Pennington in the early 2000's. O'Brien will also be forever known as the QB who was selected by New York instead of hall of famer Dan Marino. O'Brien had a nice career, but things would be a lot different for the Jets if it was "Dan the Man". In all fairness, other teams passed-up Marino in the draft. Including Marino's hometown team, Pittsburgh Steelers.

Coming out of college, Pennington seemed to be on a fast track to match Namath. He led his team into the playoffs before injuries derailed his Jets career.

Now the Jets have young Zach Wilson, who appears to have the ability to make big plays and manage a game well. The problem he's still learning but injuries have slowed his development.

Hey, a Super Bowl would be a reach, but any given Sunday the underdog can win. Ask Joe Namath. 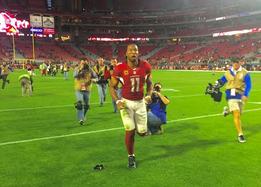 Why Larry Fitzgerald could have been the GOAT over Jerry Rice? 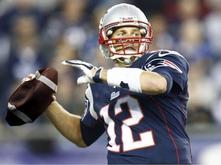 ​The NFL argued that the process was fair. Here is the introduction of the league's filing on Monday:

"Stripped of its celebrity, this case involves a straightforward exercise of authority expressly granted under a collective bargaining agreement ("CBA") and shielded from collateral attack by decades of precedent concerning labor arbitrations. The National Football League's collective bargaining agreement with the NFL Players Association affords the NFL Commissioner broad authority to impose discipline for conduct "detrimental to the integrity of, or public confidence in, the game of professional football." Exercising that authority, which mirrors the broad discretion given to commissioners in other sports to ensure the integrity of the game, the Commissioner suspended Tom Brady, quarterback on the New England Patriots, for four games after finding that Brady had participated in a scheme to deflate game balls to be used in a conference championship game. The scheme was aimed at gaining and unfair competitive advantage on the field, and it was devised to avoid detection by game officials. It struck at the heart of the game's integrity and the public's confidence in the NFL's on-field product. The Commissioner's conduct detrimental authority exists for incidents just like this."

While there's one laughable line — "after finding that Brady had participated in a scheme to deflate game balls to be used in a conference championship game" when the NFL never came anywhere close to finding that Brady participated in "a scheme" — it's obvious why the NFL would appeal even though it's not good for the sport and they've already suffered plenty of embarrassment. It would appear the NFL doesn't want commissioner Roger Goodell's authority questioned, and not fighting the vacation of Brady's suspension would invite others to pick holes in an unfair process. Here's another key portion of the introduction that makes the intention of the appeal clear:

"Not every evidentiary or procedural ruling went in Brady’s favor, but the CBA gives the Commissioner the authority to make those determinations and he reasonably resolved every contested issue. The Commissioner’s ultimate determination was elaborately reasoned and thoroughly grounded in the CBA."

Questions remains,  how Brady won an appeal if his team accepted it's guilt, team officials fired for deflating the balls and Brady never admitting he had direct involvement with the deflated balls?​​

​According to Pro Football Talk’s source, a small group of owners had been pushed

NFL commissioner Roger Goodell  to keep the penalty as is.​

​NFL Executive Vice President Troy Vincent cited the club's prior record, specifically videotaping signals of opposing defensive coaches, as a "strong consideration" in determining the severity of the punishment. Vincent also said another important consideration was level of cooperation with the investigation and the league came down hard on two things -- the club not making Jim McNally available for an additional interview and Brady not producing any emails or text messages. ​

The appeal concludes that Goodell acted "well within the bounds of discretion expressly granted by the CBA" and that Berman's decision "cannot stand."