He talks about the love of his country in Sweden, family and his goals for the team.

Get to know Larrson right here > 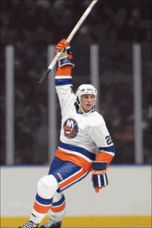 New York Islanders legend Mike Bossy has recovered a key piece of memorabilia thanks to a Las Vegas high roller.

The puck Bossy slapped into the net at Nassau Coliseum on Jan. 24, 1981, to reach his milestone 50th goal in 50 games was put up for auction in May.

Bossy’s young daughter had given the puck to a man who gave her swimming lessons, New Jersey resident Jack Jacobson. Jacobson held on to it for 30 years until listing it on eBay.

That’s when Gavin ­Maloof, former co-owner of the Sacramento Kings NBA team, swooped in, plunking down close to $7,000.

“I said, ‘We need to get this puck. It means a lot to Mr. Bossy,’” he told TMZ. “Fifty goals in 50 games — only a handful of people have ever done that. I needed to buy this puck.”

The Isles hero quipped that his daughter was “finally off the hook,” Maloof told TMZ.

Why the Islanders could return to Nassau Coliseum

The NHL casts strong doubt on this, as does a 25-year contract with Barclays Center. But the Islanders’ new home will still have the second-smallest capacity in the NHL.

Call it a dream, which is what former Islanders great Clark Gillies did last year about a return here. “It’s a stretch,” Gillies said, “but wouldn’t it be kind of neat if it happened?” It’s not hard to find believers. Even Nassau County executive Ed Mangano recently said a new practice facility and corporate office on Long Island would “provide hope” for a return.​​​

Chicago's Carl Crawford and Tampa's Ben Bishop have been the difference in the playoffs and have gotten their teams in position to win every night during the 2015 Stanley Cup Series. It's fair to say Crawford was slightly better in a series that all the games was decided by one goal except the deciding game 6.

In this series, the Chicago Blackhawks scored only 2 goals in all 4 victories to win the Cup (See below). It's being considered the lowest scoring input for any team to win the Finals series.

Chicago actually only scored 2 goals in 5 of the 6 games that decided the Cup.

But they did out-score Tampa 13-10 in total goals.

This gets back to the great goaltending by Bishop and Crawford. It wasn't flashy goaltending but solid net-tending between the pipes. Crawford simply slightly did enough, while Bishop battled a groin injury throughout most of the series.